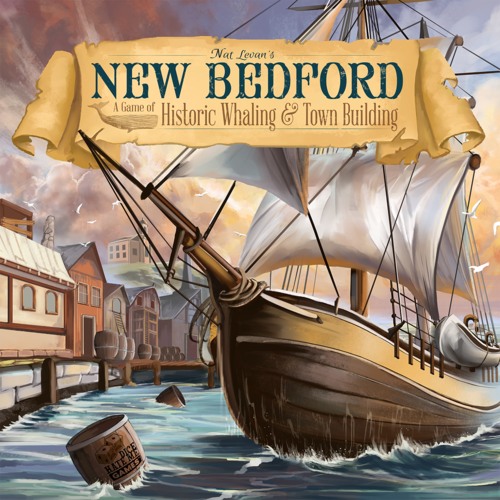 New Bedford: A Game of Historic Whaling and Town Building

New Bedford is the first game designed by Nat Levan, set in the mid 1800s, the golden age of whaling. Build the town of New Bedford, Massachusetts into a thriving Whaling community. Gather resources to add buildings with new actions and launch ships to go whaling. Go out longest for the best choice, but wait too long and the whales become harder to catch. And don’t forget to pay your crew when ships return! Carefully balance time management and timing to earn the most points in this medium-weight worker placement and resource management game.

New Bedford is published by Dice Hate Me Games (now a part of Greater Than Games), and comes in a DHMG “Rooster” size box

Also, check out Nantucket, a microgame adaption of New Bedford

Degree of Randomness: Variability in what whale tokens will be available in each round, but players have some control over order of selection.

Replayability: The same buildings are always available in the base game, but not all will be built, and players decide which ones to add.

Over 12 rounds, players will take turns placing 2 workers per round, 1 at a time. The starting player rotates at the end of each round, so players can plan their opportunities to take action spaces.

The town board and whaling board contain basic game actions: Taking goods (food, wood, brick), selling goods, building buildings, docking ships and launching ships. These actions can be used multiple times per round, but the first player to take the action in a round receives a bonus, receiving more goods or reducing the number of goods paid.

The majority of  the buildings add extra action spaces with new actions, combined actions, and more powerful versions of basic actions. When you build a building, you become the owner. Once they are built, any player can use the action on a building by paying the owner $1. In addition, buildings earn 1 point for the owner at the end of the game. Some buildings earn bonus points for the owner, so there is a race to build the most useful and most valuable buildings.

You pay a cost to send ships out whaling, choosing how far out to send them. At the end of the round all ships move closer to shore and whale tokens are drawn randomly. Ships that are farthest out have first chance to pick the valuable sperm whales, but as they move in, others have the opportunity to launch farther out and get a better pick, leaving you with only empty seas. As whales are picked over the course of the game, whales become more rare and empty seas become more common. Once a ship reaches shore, a percentage of the profits (the “lay”) must be paid in order to keep the whales selected.

After 12 full rounds, all ships must return, and points are totaled. The player with the most points from buildings, whales, and extra money is the winner.

Drive Through Review has a video of Dice Hate Me going over the basics of New Bedford from GenCon:

What people are saying about New Bedford

“Makes you feel like you are in the whale industry.”
“The theme and mechanic work well together”
“[T]he whaling component…. really added something unique to the game.”

Gamers are loving New Bedford. Players cite “lots of good choices that are presented in [a] clear fashion” and “multiple paths to victory” as their favorite parts of the game, while their least favorite part is “losing”. Players liked the level of interaction between players, the “Good blending of worker placement and resource management,” and the “Interaction between worker placement and tile drawing.” Players thought the game involved a lot of “strategy involving timing and placement on the whale chart,” and were excited about “planning when to grab resources for an extended whaling trip. Fantastic!”

Try New Bedford and join the gamers who call the game “fun from start to finish,” “One of the best unpublished games I played by far”, and “flawless.”