A Brief History of Time Management: Part III: The Future 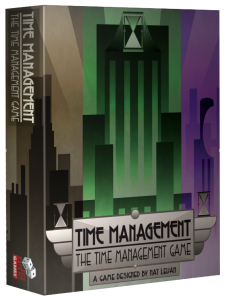 One of the first discussions after Time Management was announced, was about the overall look and feel. The GtG team really wanted to really dig into a retro-future look, and I’m in love with the direction they chose. Art Deco is one of my favorite styles, and really captures a similar feel to Bioshock and Metropolis [the 1927 film].

But in addition to art changes, I got some development notes for ways to improve the game experience. The big challenge is that this game will be on Kickstarter April 1st, and the campaign will only last for one week. That doesn’t leave much time to make big changes and test them, but one nice thing about working with a larger publisher is having a development team that can help really polish up the game.

The big piece of feedback I got was to try and make turns go more quickly. Players were getting a little bogged down in choosing what cards to play. Personally, I like having to churn a little bit for tough decisions, but that also makes it less accessible, and makes it less enjoyable with more players. We did a lot of work to rearrange the patterns and streamline gameplay a lot. In the end, we changed pattern backs to be different from the colors needed in the patterns. That one change had a lot of repercussions, but the biggest effect is that it makes it easier to see which patterns a card can be used in. It changes the tactical strategic balance a little, but it makes it much easier to see which cards in your hand can be used for which patterns without worrying about accidentally using the card you’re trying to keep.

That change also has repercussions for other parts of the gameplay, largely by changing the probability behind seeing various cards you need. To avoid players getting completely stuck through randomness some changes to setup were also necessary. The setup changes meant we needed to re-balance the card point values, increasing them a little bit, at the same time. Increasing the point values wasn’t as much of a balance issue as a feel issue, and the new scoring helps players feel like they are making more progress. With all of these changes, it was also possible to simplify the turn structure a little.

It’s never easy to take something you’re happy with and change it. But one big piece of advice I’ve learned is to listen when a publisher tells you to change something. I know it seems like you know what is best for your game, but I promise that your publisher wants to make the game every bit as successful as you do. And the publisher’s job is to understand how players will approach and react to the game. So believe them if they tell you the experience has a problem.

At the same time, you don’t have to follow every suggestion. Sometimes, the vision of a game can really be different, and you’ll need to decide whether to make a stand or compromise your own vision. You need to have a clear idea of what every element of your game is contributing to the experience, and why it is necessary to the whole. If you can’t immediately explain why, that’s a good place to start looking at changes.

Working to finalize this game in such a short time frame has been a lot of fun. And I’m lucky to have a good development team that is willing to listen to my feedback and recommendations. Be open to making your game better, even when you don’t think it’s possible, because you might be surprised.